Difference between revisions of "Isolation of lactobaciulus" 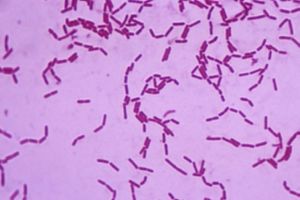 Bromocresol purple (BCP) or 5',5"-dibromo-o-cresolsulfophthalein, is a pH indicator. In its sultone form, it has a pKa value of 6.3,[1] and is usually prepared as a 0.04% aqueous solution. Bromocresol purple (pH indicator) below pH 5.2 above pH 6.8 5.2 ⇌ 6.8 Uses http://onlinelibrary.wiley.com/doi/10.1111/j.1472-765X.2008.02371.x/full Besides its primary function as an indicator, bromocresol purple is used in medical laboratories to measure albumin, and as an addition to acid stop baths used in photographic processing as an indicator that the bath has reached neutral pH and needs to be replaced.